FOX IN THE SNOW

Photography courtesy of Fox in the Snow

The first time I walked into the original Fox In the Snow Cafe on North 4th Street, it was for a meeting on a potential collaboration that required reviewing materials online. Firing up my laptop as my cohort gathered drinks, I was dumbfounded when there were no available wireless networks. Hurrying to the counter to solve my tech issue, I called out to an employee and asked if their wifi was down. “Oh, we don’t have wifi!” she chirped. I am certain my look of disbelief was obvious, but she just smiled and went back to gathering picture-perfect baked goods for the long line of customers. Thinking to myself, “That’s the last time I take coffee spot recommendations from my kids,” I returned to the community table where my group had carved out a spot for our work. I launched my phone’s hotspot, and we shared a productive (and delicious) morning over excellent, strong coffee and 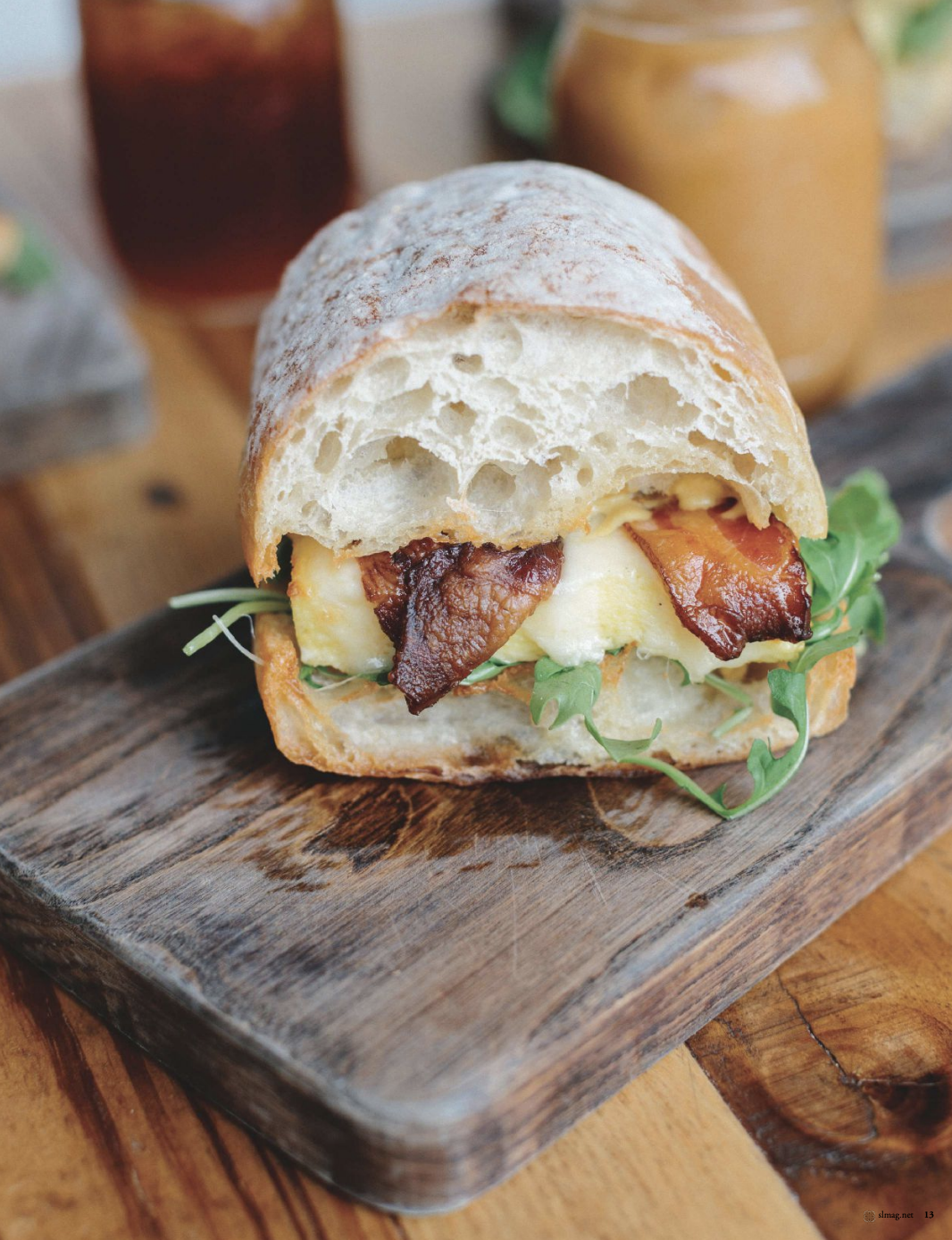 cinnamon rolls the size of my head. Despite the absence of wifi (and parking constraints created by the sheer popularity), Fox In the Snow quickly became one of my go-to spots for meetings and the periodically necessary break from my desk. It wasn’t until I met the founders of Fox In the Snow for this article that I finally had a chance to ask: “What’s with no wifi?!” Over a lengthy and fascinating conversation, I learned some of the method behind the magic of the (now chain of) Cafes. Lauren Culley and Jeff Excell met as coworkers at a trendy bakery in Brooklyn, New York. He was a transplant from northern California whose first work experience was in the service industry (though he had seen it as a stopping point on his way to a more serious career as a musician or author). Soon a job in a coffee shop felt like a good fit, and he gave into the fact that the restaurant industry isn’t a shameful way to live your life. “It’s actually a great way to make a living,” he says, as Lauren nods. She adds, “At one time, people would have asked ‘oh, what didn’t you do to be here?’”

On the other hand, it isn’t the dream she followed that makes Lauren’s story so interesting. It’s the one she traded. Nothing in her past hinted at a future in food: working as a book editor in New York City during the food renaissance, she found a way to fill a little spare time and learn new skills by volunteering with a tiny startup bakery in her neighborhood. She discovered a passion and quickly endeavored to find a way to grow her knowledge in an industry and competitive market that favored a strong culinary education. So she

approached a more established cafe with a bargain: “I have a master’s degree and a full-time job, but I will work for free if you help me learn.” Just a short time later, Lauren stood in the stairwell of her covetable editing job on the phone with her father, asking his advice about a

career move that might not have made a lot of sense to most people. “He asked me if I thought I could make a living at it,” she remembers. “I told him yes, and he told me that I should do it.” As a result of his encouragement, Lauren found herself scooping cookies for $12 an hour in back of a coffee shop; having no idea she would not only fall for, but marry, the front of house manager. The two worked alongside one another, always sensing that they could put together a concept of their own. With a saturated (not to mention expensive) market in New York, the pair visited central Ohio in hopes of capitalizing on the opportunity to launch in a market that seemed prime for their idea. “We weren’t ready to leave New York,” says Lauren, “but, we knew we had to do it right then, or someone else would.” Scouting locations, they landed on a masonry garage on the busy 4th Street corridor in an area of Italian Village that was developing rapidly. Lauren laughs as she recalls, “When we signed the lease on 4th, the contractor was certain we were doomed. I mean, it is hard to describe what we are. A coffee shop? A bakery? Whatever it is, I think it just shows how undefined this space (of coffee shops and bakeries) is.”

The concept was sketched on car rides and over coffee. They landed on the name while catching the lyrics to a Belle and Sebastian song on their way to a concert:

Fox in the snow, where do you go

To find something you could eat?

Cause the word out on the street is you are starving

Fox in the snow

While Jeff drove, Lauren searched the internet for images of a fox in the snow. A line drawing intrigued her, so she traced it back to the artist in Chicago. With a few minor tweaks, their logo was completed. “I am not even sure she realizes what we did with it,” Lauren smiles. “We needed it for our business plan which, by the way, we also found via Google.” With little more than the logo, a few interior inspirations, and a simple menu, an angel investor was secured and the dream was on its way to a reality. The science behind their success seems to be a combination of an incredible appetite for hard work, an innate ability to keep things simple, and an uncanny sense of timing. Jeff describes the sparse, industrial decor as “rest for the over-scheduled 21st Century soul.” There are no color photos inside, the signs are basic, and the food is displayed sans any markers - forcing interaction between staff and customers. Seating is largely community - at long tables with close chairs. And on the topic of no wifi? “It keeps the room lively,” Jeff explains. “It is all very intentional. We didn’t want a quiet, stiff cafe.”

The now legendary baked goods are made from scratch in the German Village shop, and then baked onsite at the original 4th Street Cafe and the newest location in New Albany. The original recipes (all the mainstays) were Lauren’s creations and “will probably never disappear” (especially that egg sandwich, as any regular can attest). The kitchen manager, Anna Decerce, brings considerable experience from a nearby and more than notable peer, Pistacia Vera. Lauren guides and provides the inspiration, while Anna makes it happen. From day one, the duo has beaten the odds. Opening and scaling in a way that any restaurant startup would envy, though Jeff challenges the perception, “it just looks like we’ve scaled. We boot-strap a lot, but the gift is freedom and autonomy.” The price is a grueling work schedule - physically and mentally. Lauren nurses their new baby during our interview, while Jeff steps away to take a call from their mechanic. “The big mixer is broken,” Lauren explains. “That’s kind of a big deal.” I comment on the timing of raising a family (they have a toddler back at home) alongside building a firecracker of a business. “We owe it to our team to grow,” says Jeff. “If you are a great team member, why would I limit your ability to grow in your work? You want to be a manager? I want to make more manager jobs so we can give you opportunities.” Lauren continues, “We also owe it to our customers. People drive a long way to get to that 4th Street shop. They deserve one in their community.” As Jeff steps away to change the baby, I marvel at their energy. When we part, Lauren ends with this: “We just want it to fulfill its potential, and when it feels like there is a ton of potential, you just want to run with it.” My curiosity motivates me to seek out the song that inspired it all. The lyrics aren’t lost on me - or, apparently, Lauren and Jeff. It only happens once a lifetime Make the most of it.